March has been a rollercoaster.

For starters, I finally broke the stall around March 6, and quite suddenly dropped a lot of weight.
You can see on this graph, I struggled for all of February to drop from 258 to 253, but then in March? BAM. 6 pounds in a couple days.

Overall, a total of 12 pounds this month, which brings me to a total of 53 pounds since surgery (and 70 since my highest weight!), and my BMI to 41.4. This April 18th is will be one year since I started the six month supervised program at my hospital. I can't believe I've come full circle that fast!
It takes your brain a minute to catch up with dropping weight. I still dont see it when I look in the mirror. I was surprised to hell when my husband insisted I try on a pair of hiking pants that I knew couldnt fit - they were 16s! I held them up to my waist and thought "Theres no way". Lo and behold, they fit perfectly. As did the other 5 pairs of pants I brought back to "test". In celebration, I went out the next week to buy a pair of 16 jeans from Target after pulling on my 20s and being annoyed at the saggy butt and constantly hiking them up.
Speaking of hiking pants, I went on my first group hike with Girls Who Hike (ohio chapter). I never would've been brave enough to hike with a group before. But I did, and while I was still the largest, it wasn't by much, and I was nowhere near the slowest - until the end, as we did the Old Man's Cave hike backwards....which means after some 3 miles of serious hiking (climbing up roots, jumping over washed out trails, climbing up ridges), you climb 20 some odd flights of stairs. I was dead at the end of that, and after about 10 flights, had to pause every 5 steps or so. But we all stuck together and pulled each other through it, and I got some kickass pictures out of it: 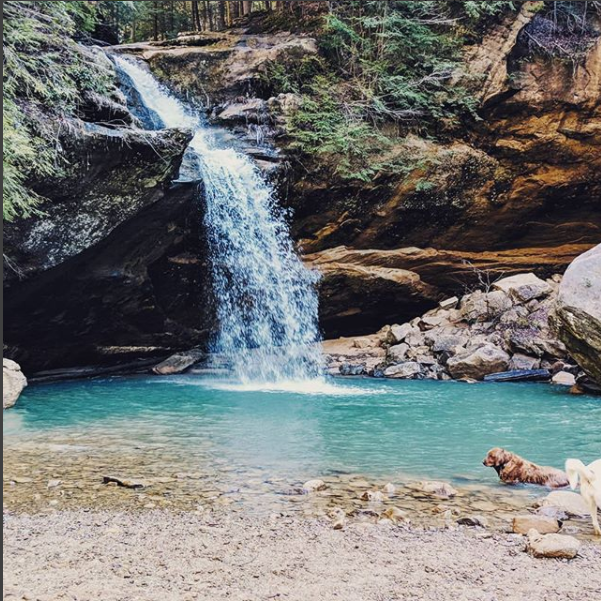 Who would believe this is Ohio in early March?! We had several doggos in our hiking group, and quite a few of them didn't mind jumping into the (very cold!) water.
Early this month, I cleaned out my closet. Here's a quick shot: 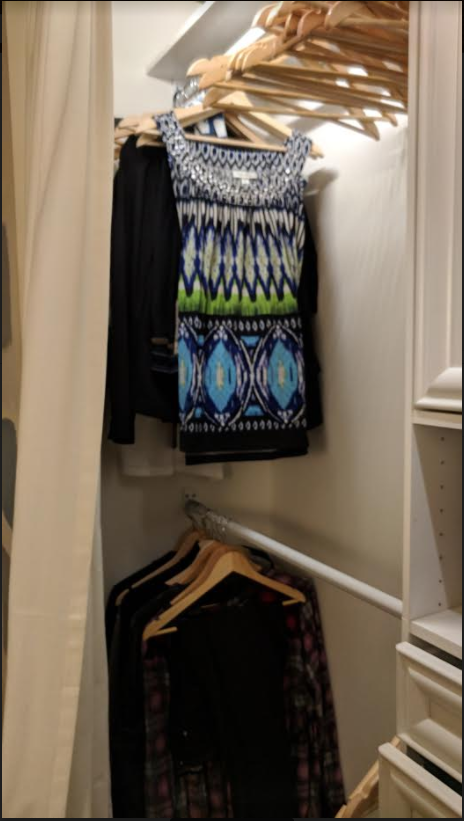 Most of those hangars in the top right used to have something on them. What's left is also 90% cold weather or dressy items, which means they'll get tossed soon, too. The dressy stuff really doesn't fit me at all anymore (they were significantly loose when I wore them to an event in January), I just dont want to get caught with my pants down (lol) if I have an interview or event to go to last minute. It was so cathartic to get rid of it all. I'm trying to be careful about buying new things, and not getting too much, but also ensuring I enjoy the experience of getting new items every so often. 4 days a week I'm in scrubs, so looking forward to being cute on a saturday is an extra bonus!
My diet is still pretty much the same. Yogurt, chicken, nuts, protein shakes. I have been down with the "adult lunchables" from oscar meyer. Essentially ham, cheese, and a few triscuits. The carb/fat/protein combo combined with 300 calories at one jump is what's currently making me capable of getting through the hustle of afternoons at work. It's still mindblowing to me that in 8 short hours I frequently get 8-11k steps in.
The other big thing this month has brought? The hair loss is real. I wouldn't be half as annoyed except I just got my hair back last year after finally being diagnosed with my thyroid issue. Annd now its all going away again, damnit. Im trying to be patient - but Ive already got the "dolls head" look to the top of my head only a few weeks in to the hair loss, so I'm a little nervous.
Another month under my belt, which is another month of making this lifestyle change. It seems pretty normal to me now to eat so little, to measure at every meal, and I don't miss going back for seconds. Once in awhile, I get a hit of surprise at how quickly I can fill up, but otherwise I'm starting to feel that this is my norm, rather than the exception. On to month 5